The term “New General Ledger” has existed in the SAP world for several years. In S/4HANA, this has now become the standard. It offers users many new, helpful, and exciting functions. This article is about the basics and advantages that the new general ledger has to offer, and which new functions are included.

Background: why is the new ledger in such high demand

With the increasing globalization of the economy, the demands on international companies are becoming more and more complex. Dealing with and handling different currencies is playing an ever-increasing role. With the introduction of the new general ledger, users are provided with a number of functions that are particularly, but not exclusively, of interest to companies with several companies in different countries. In the new general ledger, the mapping of different accounting regulations in the home countries of the individual group companies is greatly simplified by setting up several parallel ledgers.

For whom is the new general ledger interesting?

The new general ledger is of course primarily of interest for financial accounting. Due to the new summary table, the linkage with controlling is more distinct and thus offers more possibilities as well. It is therefore worth taking a closer look at it. Last but not least, IT managers should also be mentioned as an interest group. It is interesting for them to understand which possible applications and IT requirements result from these innovations.

A little technology – This is behind the new ledger

As it has already been mentioned, a new summary table (ACDOCA) was introduced with S/4 Finance. This table contains transaction data as well as master data and is also called “Universal Journal”. FI and CO documents are stored here as one document, which means that the previous separation is no longer necessary. The previously separate tables for the subledgers have been replaced by special views of the new summary table. As there is only one data source, the Universal Journal eliminates the reconciliation of the main and sub-ledgers. 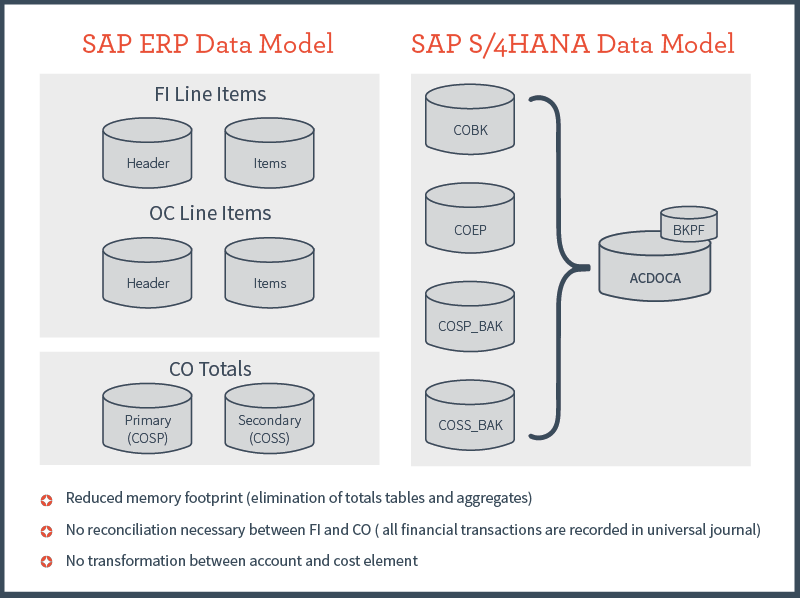 Multiple currencies can be managed for each ledger in addition to the transaction currency. Different ledgers can also have different currencies. The conversion rates can be maintained both as daily and periodical rates.

In addition to the extensive selection of fields in the standard, additional fields can be defined that can be posted into the documents.

Since the new summary table contains all FI and CO documents, a subsequent transfer of CO postings to FI is no longer necessary.

In addition to the classic SAP GUI, there is the Fiori interface. Many interesting apps for S/4 have already been included in the standard delivery. In addition, user-specific apps can be created by administrators or end users.

How does the switch to the new general ledger work?

Regardless of whether it is a green or brownfield approach, there are special requirements for implementing the new general ledger. These must be defined in the implementation project and the customizing adapted to the requirements. It is also necessary to check and update existing processes and to familiarize potential users with the new possibilities. There are additional possibilities that extend beyond the new general ledger in ECC, with the introduction of S/4. 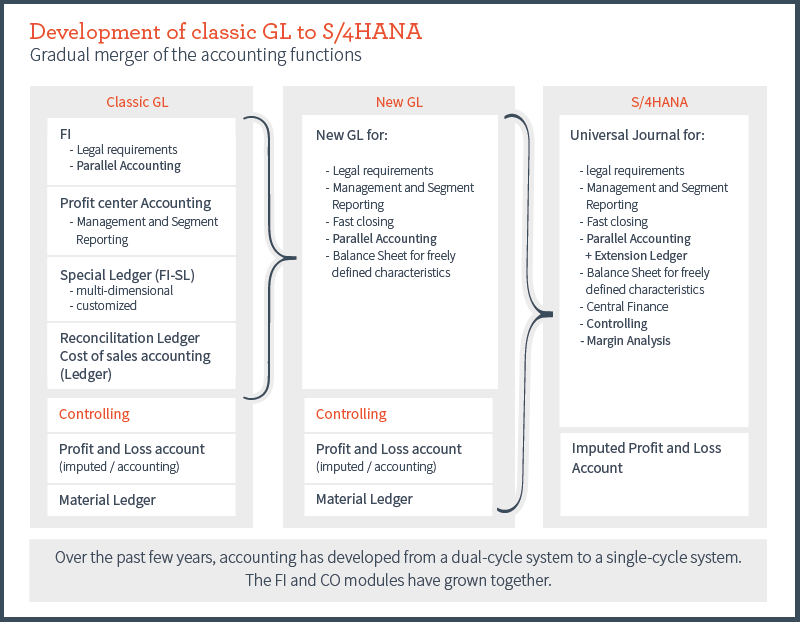 In the following post flow, the focus is on the implementation of S/4 Finance:

Whether greenfield or brownfield, it all starts with a requirement analysis. Many new possibilities open up for both the SAP novice and the experienced SAP user. It, therefore, makes sense to firstly define the functions that are absolutely necessary. This includes the currently used processes, insofar as these are to be retained, and the urgently needed but previously missing functions. During the analysis, a list of other processes can be later created and implemented. Thus, a first workable version can be created and implemented. This will then be successively expanded according to the requirements of the department.

Integration points must be considered from the beginning, as financial accounting and controlling never represent the entire business of the company alone. Whether logistics is introduced at the same time as financial accounting or at a later stage, there is an important difference in terms of integration. In both scenarios, however, it must be ensured right from the start that all business processes in finance are correctly mapped. Foresighted action is particularly important for later logistics implementation.

With a clear vision and good preparation, the implementation of the new general ledger in S/4 Finance makes day-to-day business easier, accelerates closing and brings new possibilities to financial management.

If you have any further questions on S/4 HANA